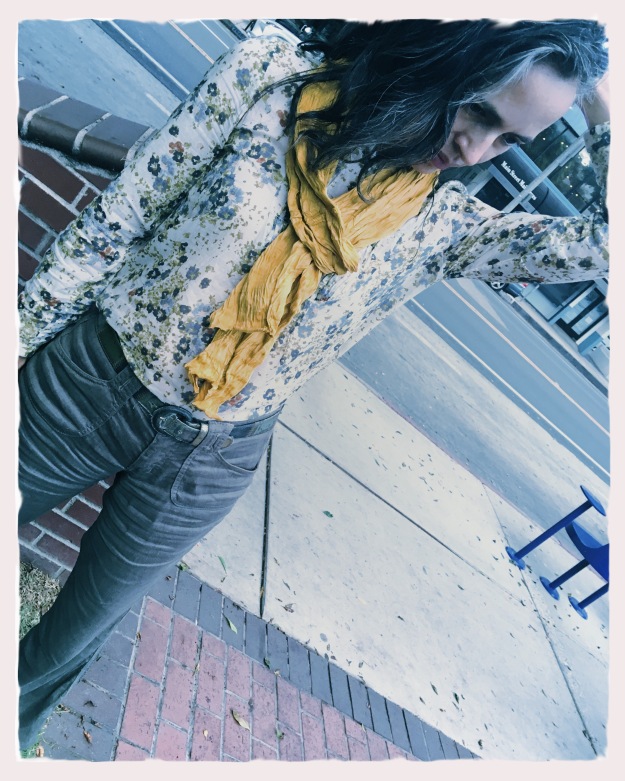 I’m enamoured by fall in a way that I never have been before. Since September 22nd, I have eaten more pumpkin related food items — including iced pumpkin juice at a Oaxacan restaurant (and yes it was refreshing, seeds and all) — than I ever have in any eight week period. I made a new Pinterest board called, “Cozy Vibes” which includes a lot of hygge inducing warm socks, fireplaces, and cable knit blankets.  I’ve been enjoying the fall leaves stuck to my windshield. I’ve even been drinking TEA while journaling as the rain comes down (full disclosure: this was after a heat wave the week before when California was seriously on fire).

I think that in the past fall wasn’t my favorite season because it meant the end of summer. Since a child, I have embraced summer as my alter ego. You know how Paris brings out the best in some people? Summer has always been my Paris season. The clocks stop, the summer dresses are in full operation and a dinner of homemade tacos is often on the beach.

But this time I was practically on a countdown to fall, 2017. Maybe that was the first sign that this fall would be different.

Summer, 2017 was amazing. It started with a family adventure through sacred forests where I told my teenage sons that I had become “enlightened”, ending with Miro in the big city. That summer was also about huge goals for spiritual self-improvement that I predicted would lead to a big a-ha moment late summer which would then lead to overcoming whatever obstacles I needed to overcome. Those obstacles would become clear, of course because of all the WORK I would do on myself! “Work” would look like yoga, meditation, healing sessions, eating really well, drinking lots of water, getting ample sleep, reading self-improvement books, and of course… journaling!

So, it all came together and by mid August I had made huge decisions to let some things go. Woohoo! I felt AMAZING. I’m telling you, I had not felt this physically strong and spiritually centered since… ever!

And then something kind of exploded in the middle of my life, as sometimes happens. It’s not always about you. Sometimes things are just going to happen that were going to happen no matter what you do. I couldn’t help thinking, as it all unfolded around me that the summer of self-improvement was meant to bring some strength and grounding with everything that was unfolding. I know I couldn’t have handled it as well as I did without all that groundbreaking self evolution. The work had really started years ago. Much of the work centered around one word.

One time we asked a dear friend and mentor what was the key to forgiveness? She had been through things written about in history books. “Acceptance,” she said. “You need to first accept that they did that to you.” We were quite speechless. That didn’t sound easy.

So, pre-fall, 2017 (sounds like a collection from Gucci!) provided many new opportunities to practice acceptance if I ever wanted any. I needed to accept what was this earthquake in my life, that it wasn’t my fault (ego!), that nothing would ever be the same, and that on a deeper level everything was always changing. All this acceptance work was sure tiring, the whole situation was mega stressful, and I started to see fall as a chance to start over.

You can see my fall season-acceptance-everything’s changing metaphor from a mile away, right? I felt really clever about that. But it’s true! It’s all true! I didn’t plan this out.

The mission fig tree in the backyard says it all. This tree stands behind the house I grew up in. I have no memory of it not being there. I played dolls under that tree, and every summer it was so generous to us. Each fig was like a piece of candy. Yes, candy grows on trees sometimes. The counters in the kitchen and the refrigerator would fill up with those dark purple, sides bursting, sweet figs. We would give them away. We would eat fig jam, and we would eat them plain. One time my mom tried making fig bars because my dad loved “Fig Newtons”. It didn’t work out, but we were all impressed with her love and efforts.

This past summer was the first time my dad wasn’t picking the figs off the tree — which was huge for a man who has lived so much of his life outside. I encouraged him, “Come on; you hold the basket and I’ll climb up the ladder.” “No,” he resisted from his recliner, “I can’t hold the basket. I can’t go up the ladder…” I was so sad. So, of course I got obsessed with that fig tree. I was going to take care of it. Not really a gardening person, I went out there every few days and checked on which figs were ripe, picking only the ones whose skin was cracking, just like my dad told me. Because even though he wouldn’t come out with me, he was going to tell me how to do it. Which, at this point I was grateful for. I asked him how often I should water it. I was surprised at how much attention it needed.

But even though I thought I was trying so hard, braving the Japanese beetles who competed with me for these fruits, even though I made the cutest displays of figs to give to the aides at his nursing home, I just couldn’t keep up. I didn’t understand how my dad ever stayed on top of taking care of all of these living things.

Eventually, I saw something I had never seen on that tree. It seemed to be crying. Without enough diligent harvesting, the birds and beetles were feasting on the higher figs and the juices were trickling down the branches and trunk making large, purplish red stains. This was shocking to me. It felt like the world was ending, like everything was falling apart. This wasn’t fair to the tree, I thought. I was sure the tree was sad like me. I was sure it was missing my dad, wondering where he was. By now I was just collecting shriveled up, pathetic, half eaten figs off the ground. Every fig I picked up depressed me more. “Another fig wasted,” I thought.

And then it got worse! The tree’s leaves started to turn yellow. Not only that, but they started to fall off. “Oh, my goodness,” I thought, “I’m killing it!” But I wasn’t giving up. I was dedicated to this tree. One day I asked my brother, who is a garden designer, “So, I need to water the fig tree every three days, right?” I wanted to be sure that I was doing everything I could to save this tree. And you know what he said? “Water it? It doesn’t need any water this time of year.”

So, then it hit me. I was misunderstanding the signs the tree was giving me because I was not accepting the changes that were inevitable. The illusion is that things stay the same. Everything is always changing. Every second.

Outfit details:  All vintage except scarf by Muji.